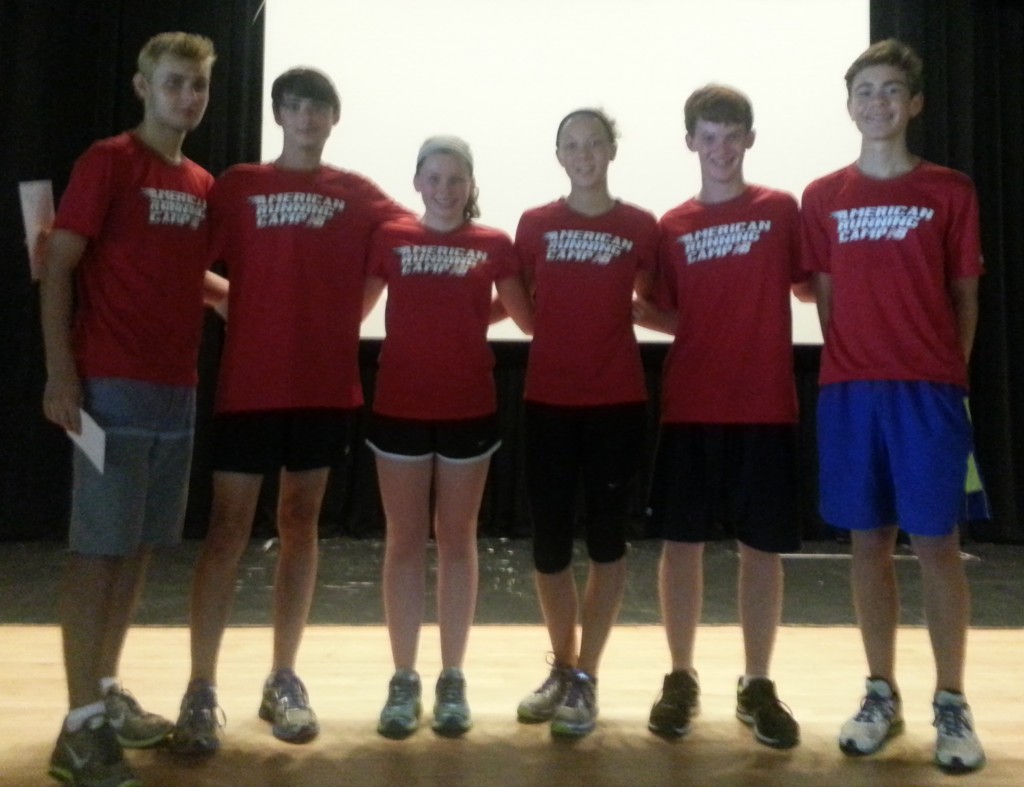 Shayna is interested in learning the correct fundamentals of running and is eager to become the best athlete she can possibly be! She has volunteered in a local hospital, as a coach for the 4th grade basketball team, as a student leader teaching K-2 children about exercise, and helped raise money for Haiti. She and her brother both will be attending the American Running Camp, and in order for her family to manage that, she needed this scholarship. Walter would be the first one to give it to her!

Jake loves running and hopes to enter college on a track scholarship. He is very enthusiastic about the American Running Camp and wants to try his hardest to become the best, because he thinks if you have the opportunity and the talent then you should use it. Running has changed Jake’s life for the better, and he wants these lessons learned to be long lasting. We hope this Walter Burgess Scholarship will allow him to fulfill this dream.

Seth is interested in all distances of running and has been on the Cross Country team for 3 years and track for 2 years. His coach says that Seth is a very motivated young man who is very passionate about running. His drive for success and improvement in his training always comes to fruition. He ran the Ashland ½ marathon this past March in just under 2 hours. Seth is an impressive young man who we are proud to support in Walter’s name.

Chloe started sunning in 7th grade and through the 8th grade was encouraged by the other girls on the team to become a better runner. She now wants to be like these girls and become a role model for the incoming freshman joining the Cross Country & Track teams. She wants to attend the American Running Camp to better herself as an athlete and learn new ways to keep herself healthy throughout her running career. She has already started giving back to other runners by volunteering at a number of track and cross country events at her school. She has the true Walter Burgess spirit and is a much deserving Scholarship recipient.

Brendan states that running has been an instrumental part of his family. He has many family members who started out running in high school and have gone on to run for college. In fact, his cousin is Kerri Gallagher, one of American Running Camps organizers. Brendan feels that going to camp will help improve his running form, fitness, and speed, so that he too can continue the family tradition of running throughout his life. Brendan’s family was impacted by Hurricane Sandy and are still trying to recover. We are sure that Walter would be more than happy to help such a hard working, dedicated runner as Brandan.

Mary Kate enjoys running because it allows her to see the tangible result of all her hard work. She thinks that running is relaxing and she always has a great time when running with her teammates. As related by her coach, Mary Kate will be serving as Varsity Cross Country captain for the 2014 season. On her team, she has consistently been a first place runner and received the MVP award. She amazingly balances her athletics, academics, and other volunteer activities. Mary Kate is already enthusiastic about participating in the Walter Run and hopes to bring along some of her teammates. We welcome her as a Walter Scholarship recipient!

Jonathan’s goal is to achieve faster long distance times and improve as much as possible over his high school career.   He feels that the American Running Camp will help him reach these goals and even more so will give him the opportunity to interact with other runners who can help him learn even more about the sport and its impact on ones life. He hopes then to spread this knowledge to others after camp is done. Another deserving young recipient whose attitude embodies the ideals of the Walter Scholarship.

Miranda is another deserving runner whom we have supported in the past with a Walter Burgess Scholarship. She thinks that running is the toughest, most challenging sport there is, and one day she wants to run the Boston Marathon! Walter would definitely be behind her in that venture, and thus, we are happy to continue supporting her running enthusiasm with a scholarship in his name. And, Miranda is looking forward to seeing us in December at the Walter Run.